The little girl was watching TV, giving it her full and focussed attention as always.

The little boy was keeping his sister company, messing about with his cars and engines, not really interested in a program that featured neither firemen nor trains.

As the end credits rolled, their mother stepped into the room saying, 'Alright kids, time to turn off the TV. It's bedtime.'

A wail of protest from the little girl, 'But Mom! I only watched for 10 minutes!'

'Too bad', the hardhearted mother replied, 'You should have thought of that when you were dawdling over dinner. Now it's time for bed.'

'No buts. Now go brush your teeth before you lose your bedtime story as well.' So saying, she reached for the remote and turned off the TV.

Outraged at the unfairness of it all, the little girl burst into tears.

Taking a deep breath, the mother prepared to deliver the threatened punishment, but the little boy was too quick for her.

Inserting himself between his exasperated mother and his sobbing sister, he pointed an accusatory finger at his mom and yelled, 'Mama naughtyboy! Nay-nay TV watching!' Then with a yowl that sounded suspiciously like a war cry, he attacked, attempting to climb up his mother's legs and retrieve the remote that she held.

One-handed and slightly off balance, the mother tried to fend off her ferocious little attacker, even as her daughter stopped wailing to watch the struggle open-mouthed. In the meanwhile, the father had arrived at the scene and persuaded her to go choose her bedtime story.

'Come on, Munchie,' she said, in the manner of a warrior queen calling off her troops. 'Let's go choose a story.'

And just like that, he released his grip on his mother's leg and trotted off behind his big sister, ready to fight for her again should she need him.

Or just fight with her, as happened exactly one minute later in an all out brawl about which bedtime story should be read first, involving much yelling, hair-pulling, and scratching.

This post is dedicated to my younger brother on what would have been his 27th birthday.
Happy Birthday, M. I miss you.
Tale told by Maggie 78 comments: 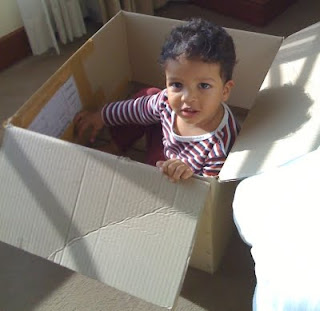 Just say these words to Munch and watch him throw up his arms and yell:

At 16 months, that pretty much sums up his life's philosophy. He's always on the go, taking on each day with astounding energy and endearing good humour.

Although I had initially thought he'd be a bit later on his milestones than his big sister, except for that first roll-over which he managed a couple of weeks later than she did, he's actually been at least a month ahead of her in everything else.

I suppose it's because Munch believes he's really three years old, and therefore sees no reason why he shouldn't turn somersaults, jump off coffee tables, go up the slide the wrong way, and hang upside down off railings, just like his sister does. The only problem is that his gross motor skills, while fantastic for a 16 month old, are really not upto 3 year old standards. So he's never 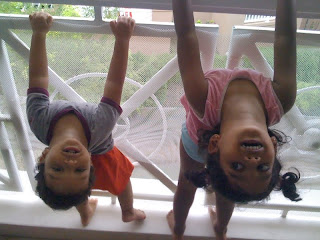 without a bruise or bump somewhere on his body, but he doesn't let that ever dampen his enthusiasm. Every cut or bump is forgotten and he goes back to do the exact same thing within minutes of the last tear being wiped. Whether that stems from real courage or from having bumped his head one time too many, only time will tell, but it certainly makes for exciting times around here!

Probably because of hanging around his extremely verbal sister (here we go again, do second borns EVER get any credit?!) Munch is so much better at communicating with us than Moppet was at this age. Not only does he have a large number of regular words, he also has some specific babble words that are used consistently for the same situation. So 'pacha pacha' is always said while handing over a bottle or a box and means open / take the lid off. Or 'minnum minnum' which means 'I want', or 'Taa!' said with a fat little hand held against his own cheek, meaning 'hot!'. And he understands so much of what we tell him too, it's amazing.

When he was barely a month old, I got the feeling that he'd be the family funny guy. I was right. He delights in getting a laugh out of his audience, and he gets plenty. His antics have us in splits all the time, and he's always coming up with new 'acts'.

At 16 months, I'm happy to report that while he continues lives up to his nickname of MatterEaterLad, his palate has gotten marginally more discerning. He's still happy to sample anything new that comes his way, animate or inanimate, but at least he's now better at recognising (and spitting out) inedible items. This also makes feeding him rather a pleasure, since he's open to a variety of tastes and textures, in stark contrast to Moppet who is an exceedingly fussy and slow eater. I have on several occasions caught her palming off her food on him which he, despite having already finished his own meal, is only too happy to accept.

He continues to maintain his easy-going good humour and is rarely cranky. He may sometimes be a little clingy around me, but usually that's only when he senses I may be going out without him, or when I've just come back home. Since for second kids, sharing is the only way they've ever known, there's none of that jealous possessiveness that consumed Moppet at this age. He is a teeny bit possessive about her, though - I've noticed that he doesn't quite like it when she plays with other kids. He comes around and generally tries to poke or shove the other child away.

He can be quite a ruffian at times and likes to play rough. Poor Moppet bears the brunt of this, because he throws himself on her and sometimes even bites her. It's him being playful and affectionate, but I've had enough of those bites to know it really hurts. And since I'd drilled into Moppet the need to be gentle with 'the baby', she neither resists nor retaliates, and just lies there crying piteously. It has reached a point where, unable to get the message across to Munch that this sort of play is not appreciated, I've had to show Moppet how to push him away firmly but gently. 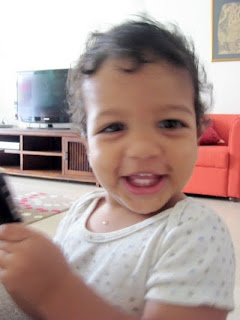 Life with Munch is a big barrel of laughs, punctuated by mini heart attacks, and laced with exhaustion. But every night, despite the tiredness, I find myself holding him for a while after he has fallen asleep, his warm body curled into me, his head nestled in the crook of my elbow. I listen to him breathe, feel his eyelashes on my arm, and gently stroke his cheek. For those few minutes, I close my eyes and pretend that I have stopped time, and my walking, talking, 16-going-on-36 month old toddler is still my little baby.
Tale told by Maggie 35 comments:

Tales from the pot

Okay, so this is not exactly the best subject for a comeback post, but given my abysmal rate of posting this year, I figure at least it's a post, right? D, this is for you :-)

I have on occasion asked friends whose kids found all things potty hilarious, whether it's a boy thing, seeing that Moppet didn't seem to find it particularly funny. They assured me it wasn't, and that I only needed to bide my time. Yes, you have my permission to call me an idiot. Of all the things to worry about, I just had to worry about her not being age appropriately amused by potty.

Anyway, even that worry didn't last for long. These days she has developed a rather sophisticated (if indeed, this word can be used together with toilet jokes) sense of potty-humour.

Me: Are you done yet, Moppet?
Moppet (examining the contents of the pot): Not yet. I've only done a leetle baby potty. Now I need to do a mama potty, a papa potty, and a sister potty.

Moppet (making a sad face): Mama, my potty is very sad.
Me (against my better judgement): Why is your potty sad, Moppet?
Moppet: Because he fell in the water and lost his best friend Susu.

These little punchlines are usually followed by a 2 second pause during which she scans my face for the appropriate disgusted expression, and then bursts into peals of excited laughter. I think she's going to have a real talent for stinky pjs when she grows up.

And as for Munch, I already know I don't need to worry about him. Everytime he farts or burps he giggles and looks at me to make sure I appreciate the wonderful sounds he's produced. He's even been known to clap his hands for a particularly loud burp. And his father is genuinely proud.

I think my original hypothesis was right. It IS a boy thing.
Tale told by Maggie 40 comments:

Can sometimes be nice to each other!

Moppet Tales is about